They say variety is the spice of life but I can assure you that if lady luck hates you like she does me then you’ll quickly realise that Naga chili is some spicy ass life too.

Let’s set the scene. There were two bros a big ass pizza with a crazy crust and a spinning disc of doom.

Naturally we went for the meatiest option on offer but the catch attatched to this delightful meat feast was found in the Cheesy bites crust.

Most of the crust was tasty with some nice stringy cheese action inside a soft pillow of dough. However set amongst the bumpy cheesy Forrest were some very threating and sticky bright red balls that smelt great but looked deadly.

The aim of the game was simple, spin the wheel of ‘hot or not’, if ‘not’ you earn yourself a treat, but if ‘hot’ you face a Naga chilli and spice infused dough nugget which was so spicy the management team all wished us luck and God speed.

Im pretty sure hot or not was the precursor to tinder. In fact I may have bragged that I should always be hot cause ya know we can’t all rock a beard like this.

It was probably that sentence that was my downfall. I had angered the chilli gods and their retribution was swift as my spins were not at all kind.

Spin one… Scott gets a normal dough ball and enjoys it. Hurray, what a jolly jape this was.

Spin two… I accidentally leave my thumb too close to the arrow and it stops on hot. Im not proud of it but I take it like a bro.

I went all in one, thinking it better to get it over with, rather than prolong the pain through tiny tasters.

My initial reaction was of pleasent surprise, a great boarder line fruity taste that only a nice mix of chillis can provide. The heat wasn’t bad at all, it definitely made my tongue tingle but it was fine. In fact it was so fine we carried on playing…

But i was not fine. I soon realized the heat hadn’t stopped, while Scott was spinning my mouth was lighting up, and the heat kept climbing and climbing. It quickly became an unnatural heat, my face became flush and for the first time I worried about when I’d experience this feeling again.

That’s when you know it’s hot, when you fear for your ass.

My machismo was strong and I spun again..hot again…b****cks. By the time I spun my mouth had not calmed down at all. That really was some hot ass stuff.

The second one went down quick but to my delight it didn’t make anything worse, don’t get me wrong I felt it across the many parts of my tongue and mouth, but the heat didn’t get worse it just stayed strong. I thank the chilli Jesus for this miracle, because if it had built up into an inferno I would have been a goner.

My unlucky trend carried on into the game, although Scott had a few hits too which you can read about on his post.

I seemed to get hit after eye watering hit and only a few breathers. That’s life though a blaze of uncomfortable pain, tears and an anxiety around spicy poos…or maybe that’s just me.

In all honesty we did have fun, although it was torturously hot it was really tasty and the pizza was great.

A good meal and laugh is a beautiful thing and I can’t fault Pizza Hut for trying to make more of that happen.

The balance of the sauce was about right to make the game hard but enjoyable and they had the right amount of chili bites on the board to ensure we both had a good meal without having to ride the dragon too many times.

Oh and because I know you were wondering…there was no need to worry, my ass was fine. 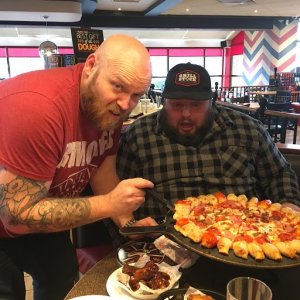 Welsh BBQ obsessive and founder of Notorious BBQ, on a journey to bring people amazing smoked meats! You should also check out superburgerbros!
View all posts by Notorious BBQ Lloyd →